In early February, 1995, I began keeping a journal of notes about films I watched, for a filmmaking course I was taking. Through no grand plan and without much thought, I kept going after the class was over, after I graduated, and throughout the years since. Today marks 25 years since my first entry.

As a kid, my relationship with film was rather stunted; my family took the ratings seriously, which meant I was still forced to rent cringeworthy G-rated Disney comedies in the clamshell VHS cases like THE BOATNIKS for birthdays as late as age 12. We didn't have cable, and going to the movies just wasn't a big part of our lives (nor was disobeying my parents, apparently).

My brother and I eventually discovered Monty Python, Peter Sellers, and more when I was in junior high, and I finally caught up with the present in the summer after I turned 14, seeing every big movie that opened, and rating each one on a sheet from a legal pad:

By high school, I was delving into the Foreign section at Neighborhood Video and frequenting the Capri Cinema, Anchorage’s beloved, slightly grimy (and dearly departed) art house, located in a strip mall on Tudor Road.

When I got to college, my fondness for watching movies led to a course called Film and Writing, in the spring of my freshman year. That fall, I took two more courses, Studies in Classic American Film and a course on New German cinema, and I began to think about a major in English with a concentration in Film Studies (long before an actual major existed).

By the spring of my sophomore year, I wanted to branch out a bit and decided to take what would (regrettably) be my only course at another of the Five Colleges, a filmmaking course titled “Film/Video Workshop I (HA 110b)” with Professor Kane Stewart, at Hampshire College. As part of the class, Kane asked us to keep a journal with ideas for filmmaking projects for the class, notes about films we saw, and anything else related to film.

After beginning with some ideas for a Super 8 short for a class assignment, I used part of page 2 to write a few thoughts about Hitchcock’s NOTORIOUS, which I saw back at Amherst, in an entry dated February 6, 1995, the day I turned twenty years old. The formal elements I would later adopt, like putting the title, director, and year on the first line, were not yet in place, so it’s a stream of consciousness entry, just a few sentences long, but it set the template for the kind of scattershot and subjective notes I still take to this day.

I’m not exactly sure why I didn’t stop when the assignment was complete, but for whatever reason, after 18 pages for that semester, I continued to fill up the remaining 100 or so, and bought another journal to continue into 1996.

My process was somewhat haphazard at the beginning. It took me a bit to figure out what films would get noted and which wouldn’t. Fairly soon after I started, I decided to note every film, no matter what, but that first summer, I made entries that either simply list films I saw without noting any thoughts on them, or just note “Watched a bunch of movies over the two weeks after school ended, most in the theater." Alas, we'll never know my breathless reactions to CRIMSON TIDE, JOHNNY MNEMONIC, and FORGET PARIS.

The notebook I bought to complete the assignment was known a "chemistry notebook,” a 7” x 9” hardcover book with 128 green, lined pages, made by the National Brand company, purchased at at A.J. Hastings on S. Pleasant Street in Amherst. I liked its sturdiness, as well as the fact that it was in a nice sweet spot, size-wise: smaller than the full 8 1/2 x 11, but bigger than a pocket notebook. I probably bought one or two more in 1996 and 1997, and then picked up a new one each time I visited Amherst after graduation, when I was living in Connecticut, then Boston and Cambridge. A trip to Hastings joined stops at Antonio’s and the Black Sheep on the Amherst nostalgia circuit.

Soon, I was taking the journal everywhere: I can see it banging around in the basket of the cheap bike I bought during my semester abroad in Cambridge, England. Or stuffed in my luggage on the plane home for Christmas break in Alaska. In the lobby of a Soviet-era cinema in Warsaw on a research trip for my thesis. On a little table at 1369 Coffee on Mass. Ave. in Cambridge, Massachusetts. Outside on the roof of the Pickford Center in Hollywood. And these days, at the long table against the window at Koffee? in New Haven.

Rather quickly, I settled into a pattern: the date, the film title, the director and year, and then, on a new line, my thoughts on the film. It’s easy to distinguish between entries written after the fact and those where I’m taking notes as I watch the film, but for the most part, the entries have the same focus: the things that strike me, at that moment. I've never tried to be comprehensive or really even analytical, but I'll note scenes, shots, moments, performances I liked, or special effects, music, bad typefaces, or fake newspapers that I didn't.

In the summer of 1997, my storage unit flooded, and a number of the early volumes were wrecked, though not totally destroyed. Eventually, I used techniques I’d learned in library school to repair and rebind some of those waterlogged, mold-encrusted volumes. 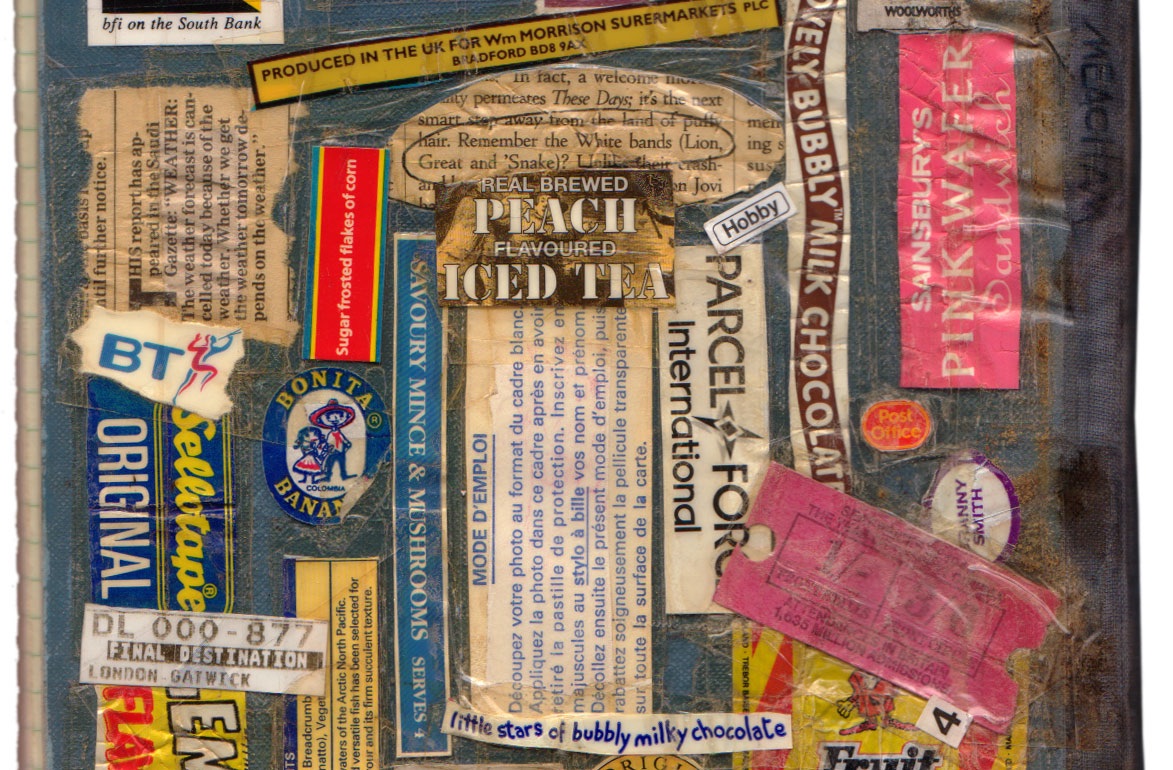 I had a habit of plastering the back of each volume with various odd bits of ephemera I found during the course of the writing, like chopstick instructions that made no sense, or outlandish claims from SkyMall products, or goofy typos from newspaper articles, as well as stickers, labels, and anything else that caught my eye. That habit continues to this day, and nicely documents the era in which the journal was used. There are ebbs and flows in terms of usable material; sometimes I scramble to cover the back before it's filled up inside, and other times, I’ve nearly filled the back of the next journal before writing the first entry.

In 2004, I discovered that Bob Slate, my Harvard Square source, no longer carried the familiar blue chemistry notebook, and on my next trip to Amherst, I saw that Hastings, too, had replaced it with a similar-sized book in purple. As I searched the internet for some remaining copies, I learned that the company that produced it had been sold to a Canadian outfit, which had altered the design slightly, with new covers and fewer pages. I purchased 25 of what I thought was remaining inventory of the original version (while hemming and hawing over whether 25 was really enough…), only to find out when they arrived that they were the new edition. I made peace with it and moved on, but I have a soft spot for the early, two-tone blue journals, with their eight bonus pages.

At some point during my time at the Academy in the 2010s, I got into conversation with my colleague Charles about the journals, and tracking moviegoing in general, and he asked if I kept track of the location and format (35mm, DVD, and so on) of the screenings. I hadn’t, and wondered why it had never occurred to me. I immediately began doing so, and at the same time went back through previous volumes, trying to fill in what I remembered.

As I fill up volume 39 this month and think about another 25 years, I'm looking back and re-reading old entries, something I think about doing more than I actually do. For the next year, I plan to pick an entry from each day of the year, starting today, and tweet a line or two from it.

I’ve never shared anything from these journals in part because they’re purely anecdotal, immediate reactions that are not particularly thought out or thoughtful, and I’m not sharing them now because I’ve suddenly decided that they are. But because they're interesting time capsules, and because I've never really looked back at them before, I'm curious to see and share a little bit of what's in there. We'll see. 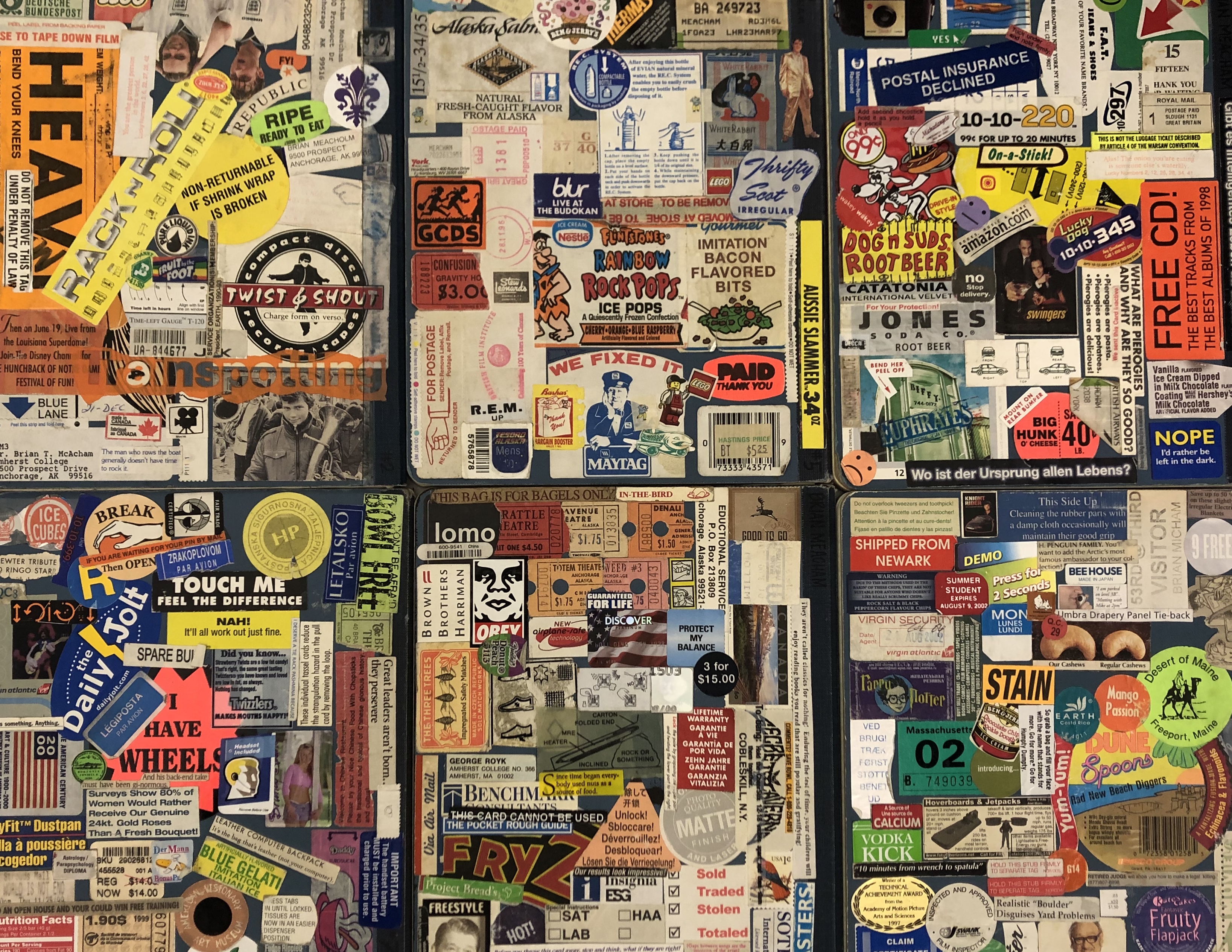